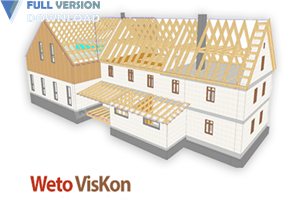 Weto VisKon v13.1 by Weto is a BIM / CAD / CAM software for Timber Construction that allows to create simple or complex timber roofs (with dormers, sky windows, chimneys), and porches, pergolas, carports, stables, etc. with framing, so Timber Framing Buildings (with Studs, Plates, Noggins), Block Houses and Massive (as XLAM). VisKon automatically creates Technical Drawings and CNCs that you expect for production. Since the first version, the target software is to create the Easier Software Solution as possible that avoids typical 2D planning problems (such as mistakes, lacking…) and difficulties of other 3D software. The result is a 3D visual builder composed of several specific 3D tools that are designed to be easy and fast for any type of Timber Construction that you want to plan and build.

WetKo’s VisKon is an advanced software for drawing maps of wooden ceilings. It’s actually a CAD / CAM tool that you can use to design wooden buildings. Early conceptualization of the final map is one of the main processes of this software. The software automatically technical plans and drawings for CNC production process and helps to save time and costs. It was originally developed to solve common problems in two-dimensional programming, but eventually, using 3D design tools has now become one of the applications in the field of wood structure construction.